So, for this project, what I had to do was get wire that was strong enough, but also bendable enough to twist and shape into a tree.  I cut nine strands 29.5 inch long.  I wish I cut more to make the tree thicker though.  After cutting each strand, I 'folded' them in half, but instead of bending the end I left a little loop to make the roots.  I took those loops and made smaller loops inside of them by folding the original in half and folding those loops in half again (then twisting them to make the loop smaller and secure).  After doing all of that, I twisted all nine wires together to make the tree and divided the strands apart into sections of four to make the branches.  It wasn't too hard, but took some time because I wasn't strong enough to get all those smaller loops.  I had to use a pair of small pliers to hold onto the wire.

I really like the roots I did.  They're pretty small and go in different directions like normal roots would.  However, I don't like the size of the tree and the branches.  I would probably spend more time next time working on the branches and making them look like they have leaves on them.  I would also make sure that the tree is thick enough and taller.  I didn't measure the size of the tree to the holder I placed it on, so I'd also make sure that the tree is in proportion to where it's going to be placed.
How to make a wire tree 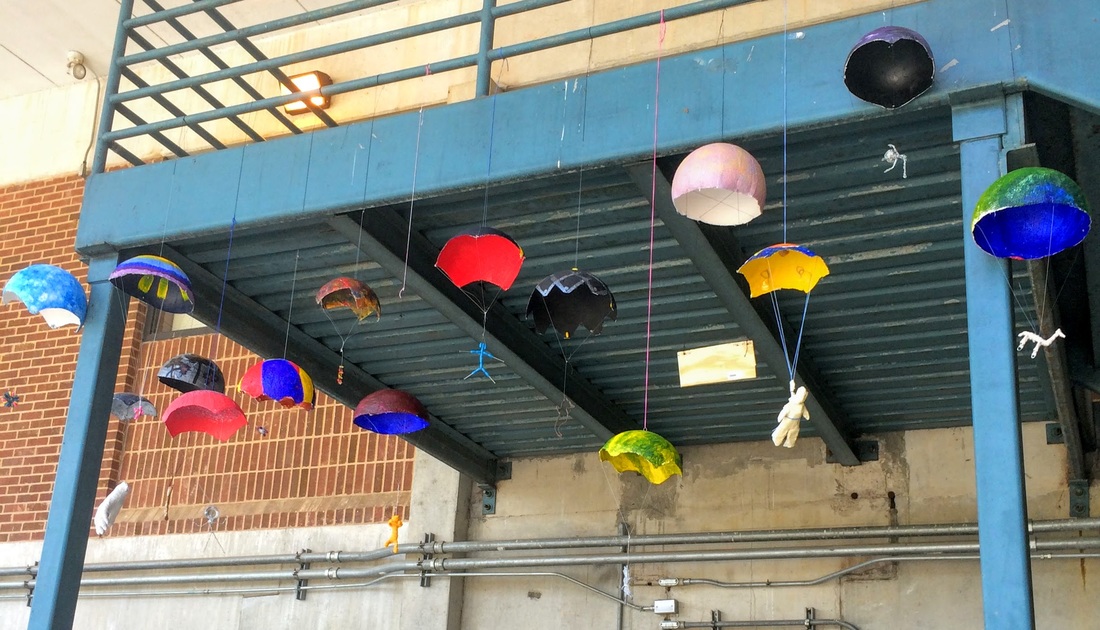 I took a balloon and blew it up to the size I wanted the parachute to be.  Then I took plaster strips, wet them and applied them to the balloon in the shape I wanted them to be.  It wasn't very hard, but it was tedious and the shape wasn't exactly how I wanted it to be.  Then I spray painted it black and painted random silver lines on it.  I poked holes for the strings to hang the item and the parachute itself.  Mine is the black and silver one with the seahorse cookie cutter dangling from it.

The way we did it was really the only way I can think to do it.  We could have also made parachutes from the bottom of bowls, but they probably wouldn't be the shape we were looking for.

Anyway, when we hung all of them up, they were all kind of just in a straight line.  When I pictured it, I thought they were gonna be more spaced out and all over the place, so that's what I would have changed with that.

Overall, I thought this was an ok thing.  I didn't like the way mine turned out, but if it were different, I probably would have liked the installation more. 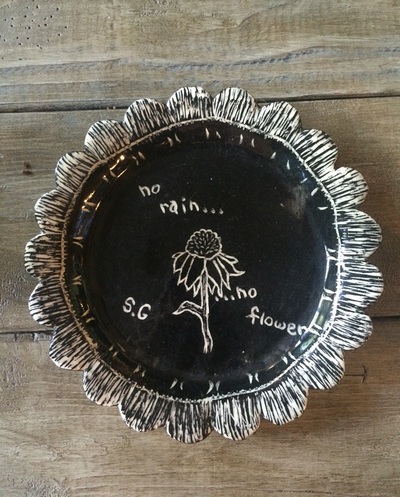 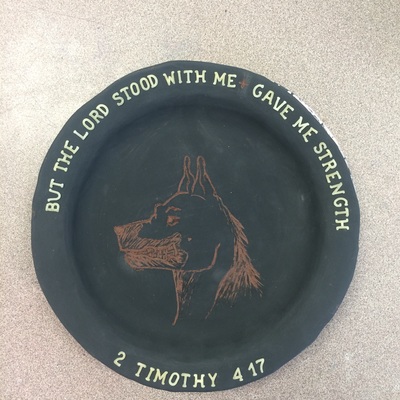 Scraffito, in simple terms, is for pottery, painting or glass and what it means is a preliminary surface covered with another and then scratching away at the surface to make something else.  It's really just layers of things.

The one on the left is the first one I made.  I liked the final product except for the word flower.  It's lopsided and goes on to the edge of the plate.  I wanted to put it on that side anyway because I thought it would look good on that side instead of the other.  The second one was done for my boyfriend, Blake.  He likes German Shepherds and I thought a quote from the bible on strength would look good because German Shepherds are strong and used for military purposes sometimes.

Anyway, to make the first plate, I rolled out a slab and fit it to the plate by pushing down on the indents of the plate.  I cut out the edges to make it look like a flower because I thought it was kind of boring as just a normal plate.  When I was finished with the edges I applied the overglaze three times, waiting for each layer to dry before applying the next.  When the final layer was completely dry, I scratched in the flower, the words, and my initials then all I had left to do was apply clear glaze.   All I did was dip the whole plate in a bucket of clear glaze and it was ready to go into the kiln.

If I were to do this again I would sketch out my design before I apply it to the plate.  That's about it.  I like everything else about my plates and the way I did it.  This project was pretty easy but I learned that patience is really important with this.  Going slow and perfecting it is totally ok!
All of my bowls are made out of clay.  The flower one was done on the kick wheel, the purple and blue small one is a pinch pot and the blue and green one was just a slab that I got too lazy to cut.  I think 2/3 of my bowls look really nice.  I don't exactly like the small purple/blue one just because it was made out of pure laziness, the colors are weird and it's too small.  My favorite one is the flower one because it reminds me of Winnie the Pooh.  Of course, because I'm a perfectionist and nothing is perfect, there are flaws in it that bug me really bad, but other than that I really like it.

To be honest, I didn't like any of the wheels. That's probably just because I'm not good at it at all and I kept failing everytime.  I only made one good bowl and it made me really happy!

The material I used was mesh ribbon.  It was pretty hard to think of how to use it, but the first thing I thought of was a wreath.  As I was making it, it looked a little boring so I thought maybe I could make a lion or something. I made a base out of cardboard and newspaper and then covered it with paper towel mache.  Then I also made the nose and ears and eyes with paper towel mache.  The whiskers were fishing line and they were applied with hot glue.  They eyes are orange marbles and I messed up on the right one.  Instead of being angry about it, I just made a scar above the eye to make it look like I messed up on purpose.  When I thought I was finished I looked at him and realized he looked a little poise, so what I did was matte spray painted the mane and cut the loops so it looked more spiky.  Sadly, I already gave it away so I don't have a picture of the final piece but you can sort of see the outcome from the picture I already have.

I really really like the way the head turned out.  I think I did a pretty good job on the ears and the nose.  The eyes are a little iffy, but they look ok.  Mrs. Sudkamp had the amazing idea of putting marbles for eyes instead of boring normal eyes.  Anyway the shape of the head was my favorite.  I would probably make the eye sunken into the face instead of sticking out because eyes are naturally sunken.  They don't bulge out of people heads.  That's about all I would change.  If I had the time and energy I would have painted the lion its normal color.

Well, I made a series of mugs and they could basically hold anything, liquid or not, so that's how its a vessel.  My original idea was for me to make candle holders and put holes in the, now, mugs and punch out my name.  But I realized I might want to drink out of them, so that's why I made them into mugs.

I really like the way my leaves turned out.  The placement, the colors and the shape is perfect.  It makes me happy when I look at them.  But, like all pieces, there are flaws.  I should have smoothed out the mugs a little more.  The smallest one-leaf mug is curved on one side and the tops of all of them are uneven.  On the inside of the medium two-leaf mug, its rugged.  Another flaw I would have changed is the color.  I only did two coats of the glaze and I probably should have done three or four to make sure that the color would be solid.  Like almost all of my work, I didn't really plan this.  I told you part of my original plan was to make this a candle holder with my initials on it, but that's not what it turned out to be.  I never really am inspired by anything.  I kinda look at different pieces on the internet and make my own version of all the ones I like.
^Inspiration photos^ 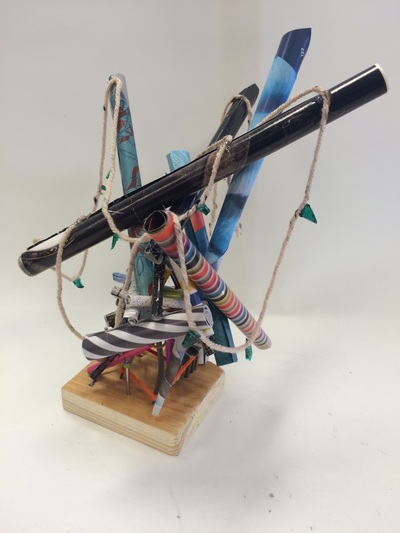 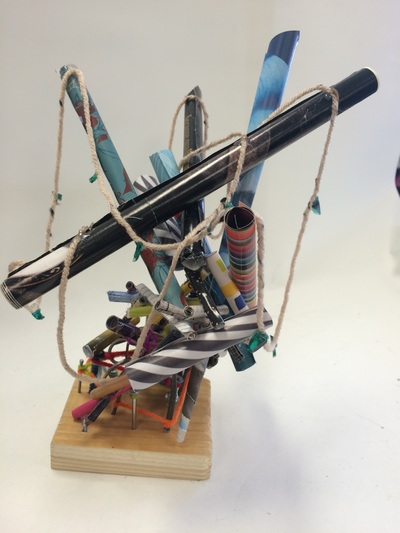 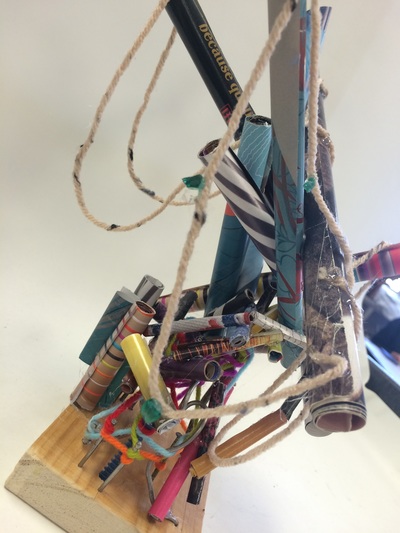 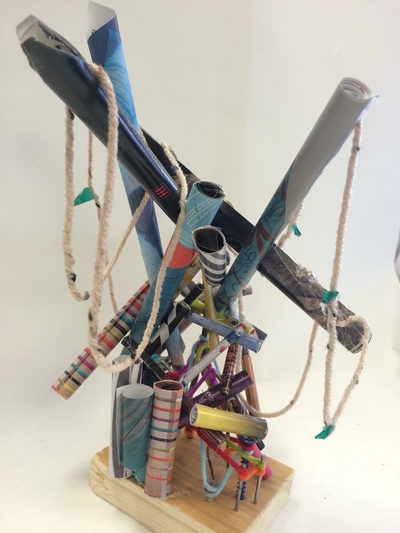 Pit firing makes a foil saggar possible.  A foil saggar forces a piece to be unique.  It makes the creator unknown about how their piece will turn out.  Everyone is its own unique design with an unknown path once it goes into that pit.

The thing I like most about my piece is how well cut out the shapes inside the body are and how much the clay chameleon looks like an actual chameleon.  However, I don't really like how to color turned out and how the glass didn't melt very well.  I fired it twice and the blue and the white glass still didn't melt, so next time I am definitely researching more about the glass I use.
My plans turned out exactly how I planned them.  They didn't turn out as well as I thought, but they still turned out how I planned.
I kind of knew how to work with clay and carve out clay before the mini lessons, but I'm glad they were there to refresh my memory.  However, I started liking chameleons a lot when my table did the cardboard relief.  That was really the only thing that influenced me to do what I did.
​       The only problem I had besides getting the right color was making sure the tail stayed on.  Also, I had trouble with carving out the holes for the legs.  Those triangles were so small I couldn't really make it smooth. 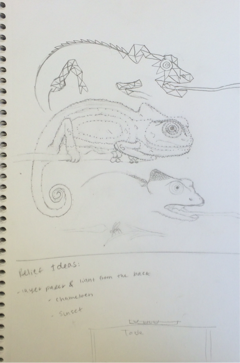 I will be doing something like a chameleon mosaic. I'm going to work with clay and each part of the chameleon will be triangles. I will probably cut out each little triangle to make a pocket so I can put different colored glass in each one and melt it. I haven't decided what I'll do with the outer clay after I fire it. I might glaze it green or paint with water colors.


I'll just go with the flow! I have a base of what I want to do but if I mess up or change my mind in between, so be it. 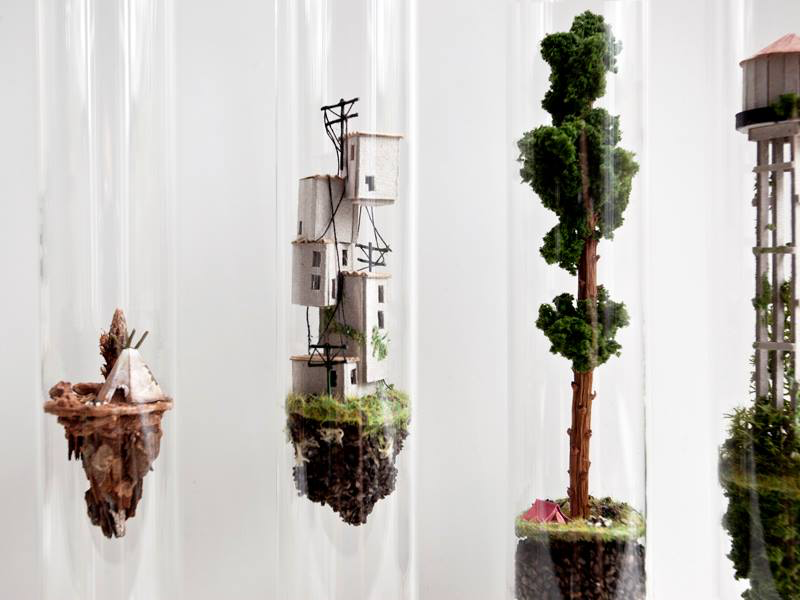 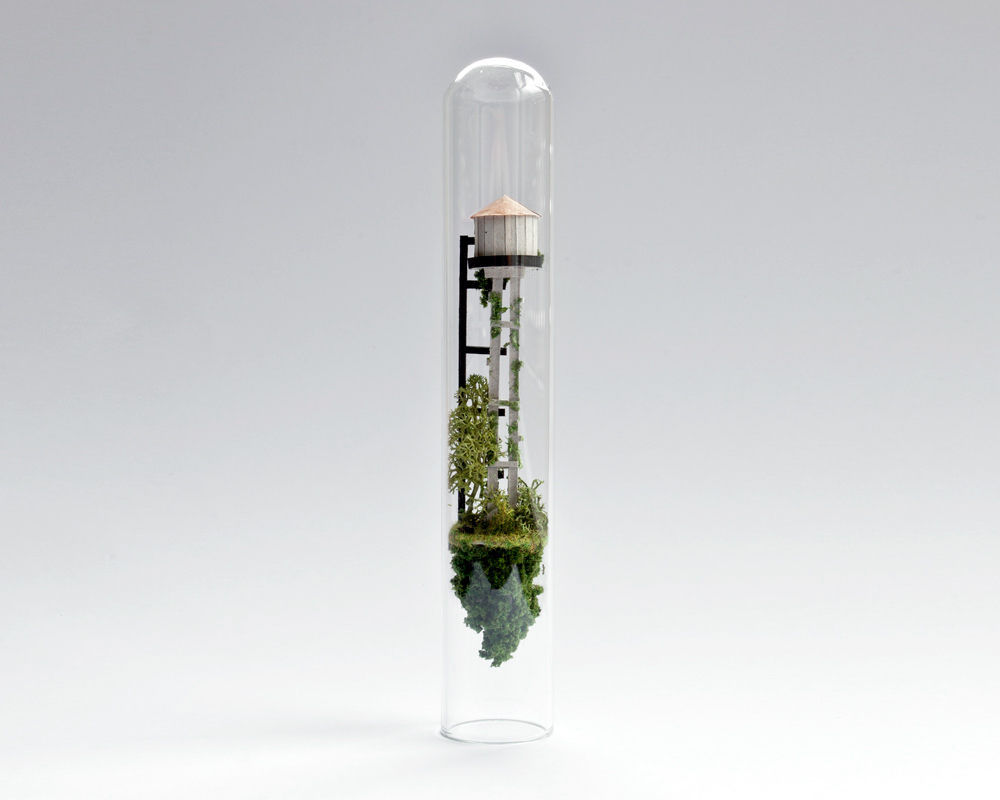